At this time there is lots of front end framework and libraries are evolved and developer are very confuse for choosing to learn a new framework. I have explored from the internet and come up with different statistics for frontend framework.

The popularity of statistics Based on State of JS 2018( Survey has done from 20,000 Developer)

(Reference from https://2018.stateofjs.com/front-end-frameworks/overview/)
Take out from above analytics based on 20,000 Developer survey React is popular and most satisfied framework among developer who has participated. Another side Vuejs, Preact, Ember, and Polymer framework is the most interesting framework to learn in the future.
However, this is a result of only 20,000 Developer all over the Globe. Majority of developers are unaware of this survey they may have a different opinion as well.

I have prepared statistics in tabular form for popular frontend javascript framework based on GitHub stars on repository by a developer and also added other Metrics like forks, commits, contributors, watch etc. to have a clear picture about the repository. 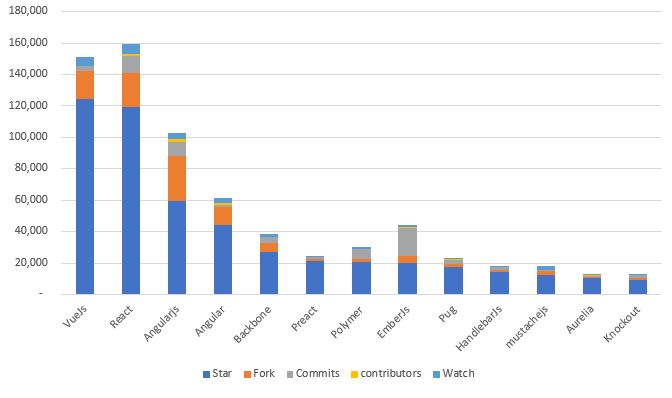 (Github Based Statistics for top javascript Frontend  framework based on the count of Repository Star, Fork, Commits, Contributors, Watch).
You can see tabular data as below for Github based stats information.
As per above statistics, VueJS is most starred front end framework on GitHub, From past two years, it is fastly evolved progressive web app framework, Probable Reason for popularity is it requires less Learning curve if you know HTML, CSS and javascript then it is easy to grab Vue js concept easily. The second reason it is competitor framework with React and Angular like Big Name Company's framework and have features from both React and Angular Framework.

Most Used Javascript Framework in Website based on wappalyzer 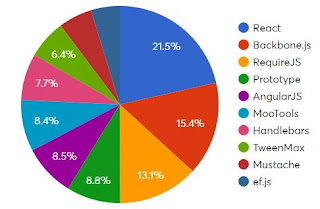 (Reference from https://www.wappalyzer.com/categories/javascript-frameworks)
As above statistics for javascript framework usage indicates some of front end framework and javascript library as well. Other than above charts I have prepared data in tabular form for a framework with live websites.
From above statistics React is a Most used framework on Internet Websites based on Wappalyzer.

Vue.js is a progressive, incrementally-adoptable JavaScript framework for building UI on the web. It is designed from the ground up to be incrementally adoptable, and can easily scale between a library and a framework depending on different use cases. It consists of an approachable core library that focuses on the view layer only, and an ecosystem of supporting libraries that helps you tackle complexity in large Single-Page Applications. React is a JavaScript library for building user interfaces.
React is a JavaScript library for building user interfaces. Build Declarative, Component-Based encapsulated components that manage their own state, then compose them to make complex UI. React can also render on the server using Node and power mobile apps using React Native.
AngularJS is a JavaScript-based open-source front-end web application framework mainly maintained by Google and by a community of individuals and corporations to address many of the challenges encountered in developing single-page applications.
Angular is a TypeScript-based open-source front-end web application framework led by the Angular Team at Google and by a community of individuals and corporations. Angular is a complete rewrite from the same team that built AngularJS
Backbone supplies structure to JavaScript-heavy applications by providing models with key-value binding and custom events, collections with a rich API of enumerable functions, views with declarative event handling, and connects it all to your existing application over a RESTful JSON interface.
Preact is a fast 3kB alternative to React with the same modern API. Components & Virtual DOM.
Polymer is an open-source JavaScript library for building web applications using polymer Web Components. The library is being developed by Google developers and contributors on GitHub. Modern design principles are implemented as a separate project using Google's Material Design design principles.
Ember.js is an open-source JavaScript web framework, based on the Model–view–viewmodel pattern. It allows developers to create scalable single-page web applications by incorporating common idioms and best practices into the framework
Pug – robust, elegant, feature-rich template engine for Node.js. It is a high-performance template engine heavily influenced by Haml and implemented with JavaScript for Node.js and browsers. It was known as "Jade". However, it was revealed to us that "Jade" is a registered trademark; as a result, a rename was needed.
Handlebars provide the power necessary to let you build semantic templates effectively with no frustration. Handlebars are largely compatible with Mustache templates. In most cases, it is possible to swap out Mustache with Handlebars and continue using your current templates.
Mustache is described as a "logic-less" system because it lacks any explicit control flow statements like if and else conditionals or for loops; however, both looping and conditional evaluation can be achieved using section tags processing lists and lambdas.
Aurelia is a modern, front-end JavaScript framework for building browser, mobile, and desktop applications. It focuses on aligning closely with web platform specifications, using convention over configuration, and having minimal framework intrusion. Basically, we want you to just write your code without the framework getting in your way from based on different front end statistics here are top three Front end Framework summary.

React was created by Jordan Walke, a software engineer at Facebook. Facebook uses React extensively in their products (Facebook, Instagram, and WhatsApp) to solve performance issue on facebook for lower internet connectivity. Due to this success, it is adopted by most Big and small size company.
Features

Vue also referred as Vue.js. It was developed by ex-Google employee Evan You in 2014. Over the last two years, Vue's popularity increased, even though it doesn’t have the backing of a large company. Vue’s contributors are supported by Patreon. Vue 3, currently in the prototyping phase is planning to move to TypeScript.
Features

Angular, developed by Google, was first released in 2010. Angular is a TypeScript based JavaScript framework. Angular 2+ is known as just Angular, which total rewritten of angular js framework to typescript based framework. Although AngularJS (version 1) still popular and it is used on lots of websites on the internet.
AngularJs Features
Angular Features

Popular posts from this blog 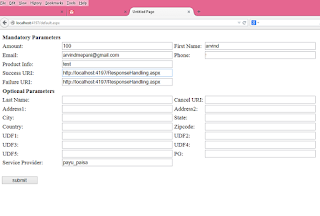 Introduction. PayUMoney is fastest growing Payment Gateway in India,which support all major banks and credit/debit card for payment settlement. PayUMoney is now provide support for enterprise hence its known as PayUBiz Payment Gateway. Description I have created test demo with PayUMoney  in Asp.Net webform which explains in various step as below.  Step1 :   Before we start first we need to configure PayuMoney or PayuBiz for our website,here is below description about technical details Production server : POST URL: https://secure.payu.in/_payment . To post successfully on production server, your merchant application status should be approved and you should use the key sent to you by PayUMoney after confirming the approval of your application. Test server: POSL URL: https://test.payu.in/_payment Key – JBZaLc (This key and salt value is provided by PayuMoney team after our payumoney account is configured and approved.) Salt – GQs7yium In above image Amo
Read more

By Ano mepani - February 17, 2018
Introduction This tutorial explains how to create a dynamic query using LINQ, Using Predicate Builder  LINQ to SQL dynamic query and Query with Entity Framework is easy. This concept first implement by albahari Description Predicate Builder is powerful LINQ expression which is mainly used when too many search filter parameter is there for querying data by writing dynamic query expression. We can write a query like Dynamic SQL. To know more about predicate delegate visit Predicate Delegate How To Implement Predicate Builder In this example, I have created an instance of PredicateBuilder with PatientInfo Model and add multiple OR and AND Condition based on their value. Predicate Builder automatically creates a dynamic query with Linq and combined into one Expression. dynamic-linq-sample.cs When We have a grid which filters record based on applied filter and filter parameter is in large number decision of use Dynamic LINQ result very high performance and mi
Read more 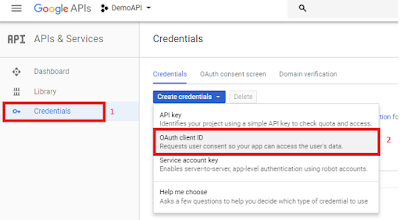 Introduction In this article, we learn about how to login using Google OAuth 2.0 with C#(.NET) or Authenticate Google API in Dot Net. Description As we know Google OAuth 2.0 requires  ClientId and ClientSecret  before we proceeding to further step. So, first of all, we have to generate ClientId and ClientSecret from Google Developer Console by creating credential or generating a credential for Web Application or from Native Application. I hope you have google account already if not then first create one before proceeding further. Step 1:  Create Credential for OAuth App. Select credential type OAuth ClientID Step 2: Select appropriate application type from the available option, Here I have choosed "Other". Select application type Based on where we are using login with google account we can select an application type. Here I have used "other" which works for a console app, Web application hosted on localhost as well as on all doma
Read more